Brent Suter is a fascinating pitcher for numerous reasons. Whether it’s his quirkiness in the Brewers dugout, his ability to homer off Corey Kluber or the fact he allowed the third-lowest average exit velocity in all of baseball, it’s not hard to find something interesting about the lanky lefty. Unfortunately for him, and frankly, for fans of baseball, Suter won’t be pitching anytime soon. Suter underwent the dreaded Tommy John surgery in late August of last year, effectively ending his 2018 season and calling into question his availability for 2019. There’s a chance Suter could return to a major league mound late in the season, though that remains to be seen, and quite frankly, it seems a bit optimistic.

So while we wait for Suter to heal and for this dreary winter to end, I thought it’d be fun and enlightening to write a post about yet another weird statistic authored by the man, the myth, the legend.

Last season there were 110 pitchers who faced an opposing pitcher a minimum of 10 times. Six of those pitchers failed to allow a hit to their counterpart — Freddy Peralta, Carlos Martinez, Wade Miley, Jacob Nix, Jarlin Garcia and Stephen Strasburg. The other 104 pitchers weren’t as lucky, as they all allowed at least one hit to pitchers. Notice how Suter was one of the unfortunate ones. Well, that’s because Suter had an incredibly difficult time against his opposite number. He faced 26 pitchers in total and somehow, almost impressively, gave up seven base hits, equating to a .269 batting average. Only two pitchers — Matt Koch (.316) and Ty Blach (.308) — allowed a higher average than Suter. He also allowed a .251 wOBA (six singles and one double) against pitchers, which was seventh-highest mark.

Here is every pitch Suter threw to a pitcher that ended the plate appearance. 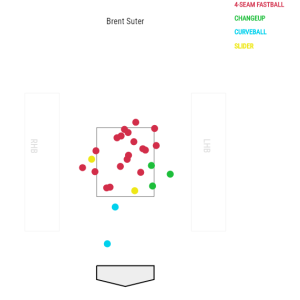 That’s 19 four-seam fastballs, three changeups, two curveballs and two sliders. The first thing that jumps out at you is the number of fastballs and the location of those fastballs. However, diving deeper into Suter’s pitch arsenal, it’s really not surprising he utilized his four-seamer so often. He threw it 63.5 percent of the time during the regular season, ranking as the sixth-highest rate in all of baseball. The location, though, is more troubling, as nearly all of his pitches ended up high in the zone.

Here is the pitch location of every base hit Suter allowed. 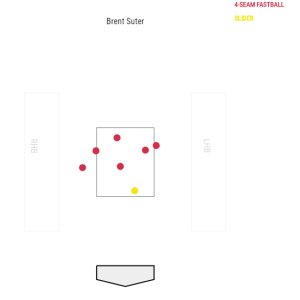 Five of the seven hits were on pitches in the middle-to-upper part of the zone, and all but one came via the four-seam fastball. The only hit Suter gave up to a pitcher against his slider was to Rockies’ hurler Kyle Freeland. That happened on May 12 when Freeland roped a grounder through the right side of the infield.

And as far as that one extra-base hit Suter allowed…

Granted, that ultimately should’ve been a single, but since Domingo Santana (I miss you) took a poor route, Yu Darvish landed on second base easily. Though it’s not like Darvish didn’t deserve a base knock there. He crushed Suter’s offering for an exit velocity of 99.5 mph. It came in at 86 mph and left the bat nearly 14 mph faster. For a pitcher, that’s eye-opening. The fact Darvish crushed one at nearly 100 mph should be the most embarrassing moment of Suter’s life.

As I mentioned earlier, Suter allowed the third-lowest exit velocity in MLB to all types of hitters at 83.7 mph. Meanwhile, against pitchers, Suter allowed an average exit velocity of 69.5 mph or the 18th-lowest velocity among qualified pitchers. It makes little to no sense that Suter struggled so much against pitchers. Essentially, Suter’s troubles against hurlers were more bad luck than anything else, and honestly, this means absolutely nothing going forward. The fact he gave up seven hits to pitchers doesn’t mean he’s going to get blasted by them again next season, health permitting.

This is just one of those articles that breaks down an irrelevant, yet entertaining, statistic.