The Milwaukee Brewers made a trade Thursday, albeit not for a starting pitcher or hitter, the two biggest needs on the club. Instead, they landed Chicago White Sox reliever Joakim Soria in exchange for LHP Kodi Medeiros and RHP Wilber Perez.

This marks the second time in as many seasons that general manager David Stearns has orchestrated a trade for a reliever with the White Sox, the first being Anthony Swarzak, who ended up pitching quite well for the Brewers. This time around, however, things are a little different. Like in 2017, the Brewers are in contention for a playoff bid, and like in 2017, the Brewers are trying to overcome the Chicago Cubs, but unlike in 2017, the Brewers feel more confident they have the pieces to compete. They didn’t feel like that a year ago, which is why the only trade deadline moves they made were acquiring Swarzak and Neil Walker. Milwaukee had holes elsewhere on the roster, but the team didn’t think it was worth the price to fill them. That belief has changed, as the Brewers have been rumored and linked to almost every available player on the trade market, and while J.A. Happ and Zach Britton have found new homes elsewhere, Milwaukee still has its sights set on numerous players.

One of them, apparently, was Soria. But who exactly are the Brewers getting in Soria?

In 38.2 innings for the White Sox, the 34-year-old righty has pitched to a 2.56 ERA and an even more impressive 2.15 FIP, totaling 1.4 WAR after being worth a total of 1.7 WAR last season. Soria’s strikeout rate (29.9 percent) is his highest mark since 2009 and his walk rate (6.1 percent) hasn’t been lower since 2014. He’s been able to generate more swings and misses than ever before, and a lot of that has to do with a rejuvenated fastball. 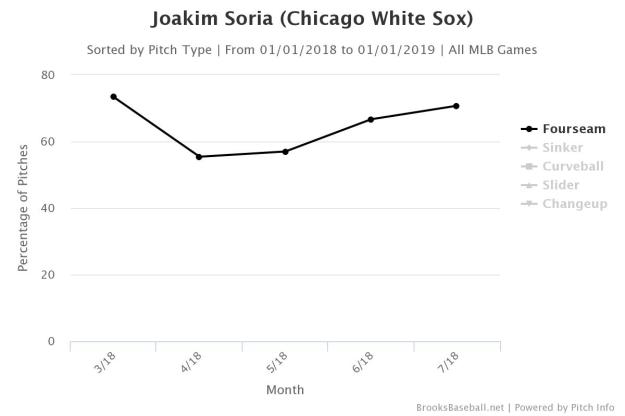 It’s really no surprise he’s utilizing it more. According to FanGraphs’ pitch values, Soria’s fastball has been worth 10.0 runs. Only 10 other relievers in Major League Baseball have had more effective fastballs according to this metric. He’s thrown his fastball 420 times, and opposing hitters are batting just .231 and slugging .295 against it, despite it averaging around just 93 mph. Soria’s fastball hasn’t been this good since his first two years in the league 10 years ago.

While Soria has a $10 million mutual option for 2020, it’s highly likely that Soria’s stay in Milwaukee will be short. His buyout will only cost the Brewers $1 million, and the White Sox have already sent that amount over as part of the trade agreement. Soria will be a rental, but that’s okay. He’ll immediately improve a bullpen that is already dominant. The Brewers are a better team with Soria, and while the cost — depending on how you feel about Medeiros — wasn’t cheap, that’s the price of doing business, and ultimately the price to get into the postseason.