The last time Yovani Gallardo donned a Milwaukee Brewers jersey, he was considered the team’s ace. That’s not the highest of compliments when looking at the stable of pitchers the Brewers employed during his tenure, but nonetheless, Gallardo started 211 games across eight seasons for the Brewers and accumulated 20.8 WAR and an ERA of 3.49. He was more than serviceable during his time there, and should be considered one of the greats in franchise history. Milwaukee has been absent of Gallardo for three years now, until…

Source: Free-agent RHP Yovani Gallardo in agreement with #Brewers. Gallardo was Brewers’ second-round pick in 2004, pitched for MIL from ‘07 to ‘13. #Mariners declined his $13M option. Combined ERA past two seasons: 5.57.

On the same day Matt Kemp was reunited via trade with the Los Angeles Dodgers, Gallardo — a free agent — found himself back home as well. Now, while the Dodgers are keen on flipping Kemp, the Brewers hope Gallardo can contribute to the team’s playoff aspirations in 2018. The team has yet to announce the deal, so his role and contract numbers are still unknown, but the deal is likely a one-year contract. Though they have money to spend, the Brewers aren’t going to spend a good chunk of it on a guy who posted a 5.72 ERA last season. A one-year deal laced with incentives is a good bet here.

While most of you may remember Gallardo as a swing-and-miss strikeout pitcher, he actually hasn’t fit that mold for a while now. He started to change who he was when he was still in Milwaukee, but the alterations were truly put on display when he jettisoned to Texas and subsequently Baltimore and Seattle. The former second-round draft pick began to pitch to contact and ultimately forfeited strike outs in the process, as illustrated by the chart and table below. 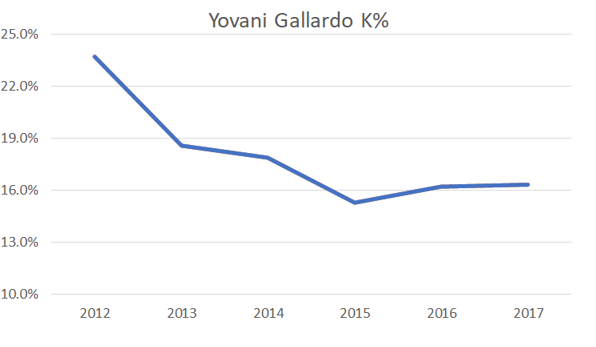 Since 2012, Gallardo’s strikeout rate has lowered in almost every subsequent year. He saw it rise a bit this past season, but not enough for any significant optimism.

Because Gallardo has lost some velocity over the last few campaigns, he’s been forced to try to get hitters to put the bat on the ball rather than racking up outs via three strikes. The results, however, haven’t been all that kind to the veteran. In his last 51 appearances (45 starts) spanning the past two seasons, Gallardo’s 5.57 ERA is the 11th worst mark among all pitchers with at least 140 innings. His FIP ranks just as poorly, and his 0.6 WAR is bested by 164 of 190 pitchers.

So why on earth would David Stearns and the Brewers waste their time on someone clearly past his peak? Shouldn’t the front office be focused on acquiring bigger fish — like an Alex Cobb — who can actually contribute to the team in 2018? The answer to the latter question is yes. The answer to the first question is a bit more complicated.

Since his arrival, Stearns has set his sights on acquiring low-risk, high-reward talent. Dealing with a mediocre payroll, he doesn’t have the luxury to spend big every offseason as he would if he were the general manager of the New York Yankees. Instead, he has to perform his job with the certain constraints. And so far, he should get all the credit in the world. He found Jonathan Villar, who was an unknown entity before coming to the Brewers. He traded for Travis Shaw and signed Jesus Aguilar, both of whom performed above expectations in 2017. Stearns has been able to find diamonds in the rough on a consistent basis since joining the front office, and while this is the first offseason in which he intends to spend money on free agents, signing a pitcher like Gallardo isn’t the dumbest thing in the world.

By signing Gallardo to an expected short, and small salary deal, he’s taking another low risk approach. Granted, Gallardo’s ceiling is no longer what it was, but the Brewers need someone in a long relief role, and if needed, someone who can fill in as a starter. Jimmy Nelson will miss a considerable amount of time next year, and the team will need multiple arms to fill his void. Gallardo figures to be one of those. If he fails, so what? The consequences will be minimal if any at all. If he succeeds, then Stearns just once again proves he’s a wizard. No risk is the name of the game, and that’s exactly why the Brewers signed their former ace.

The projection doesn’t love him, though compared to Gallardo’s last two seasons, it’s a considerable improvement.