Not many starting pitchers in Major League Baseball can be successful while throwing just two pitches. Pitchers usually face a batter two or three times throughout a game, and if the batter has to guess from just two pitches, odds are he’s going to have a favorable outcome. Hall of Famer Greg Maddux is one of the few successful two-pitch pitchers, but he’s the definition of an outlier. He relied heavily on an elite sinker and devastating changeup, and ended up being one of the game’s best thanks to his knack for forcing ground balls. You’ll be hard-pressed to find another two-pitch pitcher who can do that.

That’s what Taylor Jungmann is trying to do, though, as he is solely throwing a four-seam fastball and a curveball thus far in 2016. Yet, the results haven’t been favorable. In fact, they’ve been downright poor.

Through three starts, Jungmann has a 9.00 ERA, 4.88 FIP and 4.39 xFIP. He’s striking out just six per nine and is allowing a .357 batting average on balls in play, which, by the way, is the 12th-highest mark in the majors. Usually I would say that high of a BABIP isn’t sustainable, but Jungmann’s pitches are getting crushed at such a high velocity, I’m not so sure we’re going to see much of a dip. According to Baseball Savant, Jungmann has allowed an average exit velocity of 93.98 mph; only 10 other pitchers have been hit harder (min. 100 pitches). Oddly enough, two of those pitchers are also Brewers in Wily Peralta (95.64 mph) and Jimmy Nelson (94.83 mph). Maybe it’s a Milwaukee thing.

Clearly, hitters aren’t being fooled by what Jungmann has to offer, partly because neither of his two pitches are considered dominant. That’s showcased by his numbers.

As you can see from the chart, Jungmann loves throwing his fastball, while mixing in his curveball about 31% of the time. Brooks Baseball says he’s thrown three changeups, but that could just be a classification error.

Jungmann has just eight strikeouts on the year, 75% of those coming via is curveball. His curveball has actually been somewhat successful; it’s his heater that batters are demolishing. Just look at Jungmann’s BABIP and isolated slugging. It’s sky high. The reason his curveball has limited hitters to a .211 batting average can be explained by the fact that hitters are simply expecting his fastball. Wouldn’t you be if you knew your pitching opponent threw it at a 66.8% clip with only one other pitch option? Of course you would.

Throwing just two pitches is new for Jungmann. He didn’t do it in 2015, and as far as I can tell, he didn’t do it in the minor leagues. Last season Jungmann used a bigger arsenal of weapons. 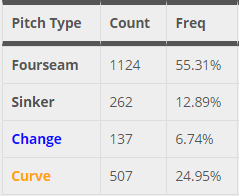 A year ago he had a changeup and sinker. Where have they disappeared to in 2016? And why? It’s not like they were ineffective pitches. On the contrary, actually. Jungmann allowed a .244 batting average against his sinker, and a lowly .143 average versus his change. And in case you forgot, Jungmann had a wonderful rookie season, posting a 3.77 ERA and 3.92 FIP. Why he chose to abandon two pitches that worked for him is a question that deserves an answer. Did new pitching coach Derek Johnson make that call? Was Jungmann uncomfortable throwing those pitches?

Before we all start freaking out, though, we must realize it’s only April and Jungmann has only pitched 13 innings. Maybe the right time to throw his sinker or changeup hasn’t occurred yet. That seems likely seeing as how Jungmann threw those two pitches just 18% of the time last year.

But nonetheless, Jungmann’s season hasn’t started according to plan. His strikeouts are down, his walks are up and his fastball is being served on a silver platter. He needs to either start mixing up his pitches like an actual major league starting pitcher, or hope his fastball and curveball magically become Aroldis Chapman– and Clayton Kershaw-esque.