You may remember that I picked Mike Fiers as my dark horse to snag a few Cy Young Award votes. No? Well, read it. This is an update on my pick as well as a chance to help you better understand the season he’s having.

Despite his fat ERA, Fiers has actually been a very solid starter for the troubling team in Milwaukee. He’s been worth 0.9 WAR in 10 starts, and ranks 30th among starters in Expected Fielding Independent Pitching (xFIP).

Fiers has been good, but he could be even better. But before we get to that, let’s look at the one big aspect of his game in which he’s flourished the most.

Fiers has always been a strikeout guy, a trend he’s continuing in 2015. He’s punching out over 26% of batters he’s faced and only 10 starters have a higher rate. More importantly, after a plethora of walks in his first few starts of the year, Fiers has done an excellent job of limiting free passes. This is one of the reasons his ERA should starting dropping. Additionally, his K-BB% is outstanding. A pitcher’s in-season K-BB% (strikeout percentage minus walk percentage) tells us a lot about his future performance. If a pitcher’s K-BB% is great, he’ll most likely be a great pitcher throughout the rest of the season, and vice versa. Fiers’ ratio is great. It sits at 19.6%, the 15th-highest mark in baseball. He’s striking out batters at a huge rate and not walking them. That’s just want you want out of a pitcher.

Based on this, Fiers’ ERA should be much lower; however, there are two glaring issues that he needs to correct. One involves a lot of unluckiness, but the other is all on him. Let’s tackle the latter first.

Fiers has given up seven home runs (six of them off his four-seam fastball), and as a result, is giving up 1.22 home runs per nine innings and owns a 12.1% HR/FB ratio.. Sadly, those aren’t even the highest marks on the Brewers. With a slow 88-90 mph fastball and a sometimes hanging curveball, Fiers has to hit his spots perfectly in order to get outs. When he doesn’t, this happens. 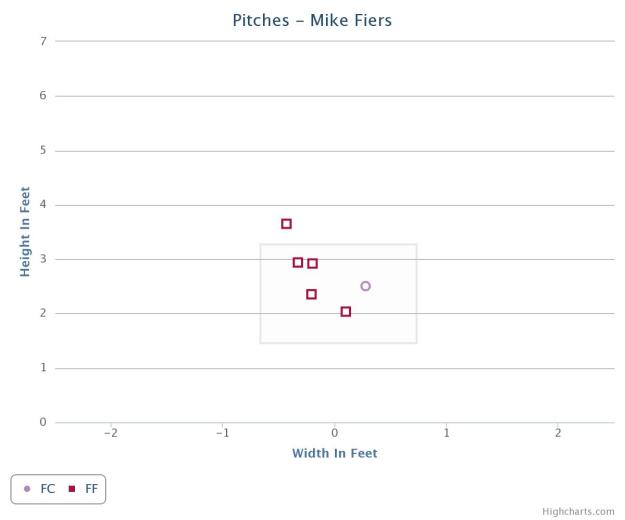 All of those home run pitches were in either in the middle of the zone or toward the top. He missed his location on every one.

But Fiers is a guy that’s going to give up home runs. He always has and that’s just who he is. He won’t be able to hit his spots perfectly every time, meaning some pitches will end up in the bleachers. He still, however, can limit them a bit more.

Batting Average on Balls in Play

Like Ryan Braun (read this), Fiers has also been a victim of some pretty rotten luck in 2015. Although in Fiers’ case, his luck isn’t as bad luck as Braun’s.

Out of every qualified starter in Major League Baseball, Fiers is allowing the highest batting average on balls in play. His .386 BABIP allowed beats the next guy by 11 points. Almost every ball put in play is falling against Fiers, and a part of that has to do with his hard-hit rate. Fiers has a crazy high BABIP and a 1.55 WHIP — this is the first time I’ve mentioned WHIP on this, so be glad you’re witnessing history — because hitters are making hard contact 42.2% of the time. Once again, just like his BABIP, no one in baseball has a higher percentage than that. So it’s really no surprise that so many balls are falling for base hits.

The surprising thing is, however, that up until this season, Fiers had only allowed a .295 BABIP. And that makes sense. Fiers is a strikeout pitcher and strikeout pitchers usually generate weaker contact. That was true for Fiers until 2015 rolled around. Yet, there’s really no way batters can continue having this much success on batted balls. Regression to the mean should take its course.

Forget about Fiers’ win/loss record. Forget about his ERA. If you do that, you’ll realize that Fiers has pitched quite well this season. If he can at least keep the ball in the yard a little more frequently, and if batters stop crushing the ball off him, Fiers should only get better.

And who knows? Maybe my Cy Young prediction will turn out to be right.